History Lessons from the Tokugawa Matriarchy

History Lessons from the Tokugawa Matriarchy:

In 1716, Tokugawa Yoshimune, the great-granddaughter of the first Tokugawa shogun, become shogun herself, despite being the third daughter of a branch family and having a low-ranking concubine as a father. During her reign as Shogun, Yoshimune enacted a number of reforms, though she maintained Japan’s closed-country status for fear of a foreign invasion if anyone learned that the country was actually run by women.

Not the version of Japanese history you learned in school? Then get thee to a purveyor of fine manga, for you have much to study.

A very simplified version history: This manga takes place in the Edo Period Japan (1603-1868). After defeating Oda Nobunaga and Toyotomi Hideyoshi, Tokugawa Ieyasu became the first Tokugawa Shogun. Although the Emperor was still in the picture in Kyoto, the real power for foreign policy, laws, and military decisions lay in the Shogunate in Edo (now Tokyo) until 1868, when the 15th Shogun abdicated power to the Meiji Emperor. The ôoku, from which the series takes its name, refers to the Shogun’s harem of women, including his wife, concubines, and mother; no men outside the Shogun and certain advisors could enter the inner chambers, and none of the women could leave without special permission.

In creator Fumi Yoshinaga’s genderswapped version of history, a mysterious epidemic called the Redface Pox suddenly breaks out during the reign of the third Shogun, Iemitsu, and kills off most of the young men, shifting the male-female gender ratio to 1:4. This has enormous effects on society; perhaps most obvious is the shift to females heads of house, businesses, and the government. The Shogun is a woman, and her harem of “3000 beautiful men” is famous throughout the land.

While Ôoku may at first glance seem like either a feminist utopia or a “misandrist” dystopia, it’s neither. I would call the series social history sci-fi/fantasy. The manga begins during the reign of the child Ietsugu, the seventh shogun, when Mizuno, the son of a poor family, decides to sell himself into the ôoku. The ôoku itself, Mizuno unhappily learns, has more intrigue than House of Cards, especially when the new shogun, Yoshimune, arrives to take over after the child shogun’s death. With all the men plotting to win power for themselves, whether as an advisor or as the father of the Shogun’s heirs, Mizuno finds himself a scapegoat in their schemes. After the conclusion of the first volume, the next six volumes cover the rise of the first female shogun, Iemitsu, and then continue with Yoshimune’s reign and beyond. 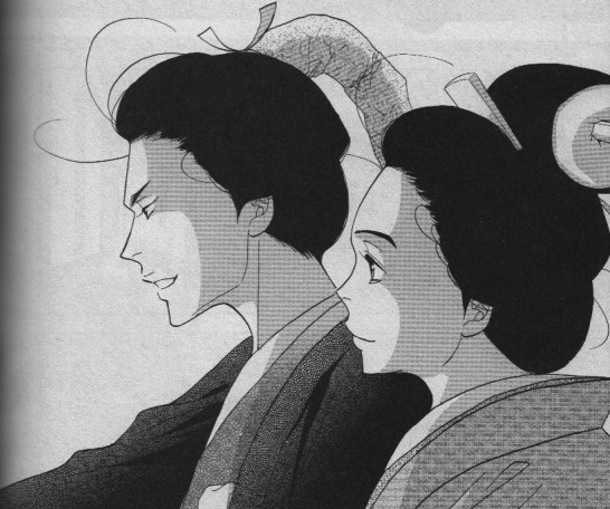 Regarding the translation, the original Japanese is written in Edo-period speech, the cultural equivalent of Elizabethan English, and, as an added complication, several of the characters speak regional dialects that don’t translate well into English. The translation is sort of a faux-Shakespearean English and has been criticized as being clunky. I prefer the original Japanese, but once you get used to the linguistic style in either language, it’s easier to read. The English version also includes helpful endnotes about some of the historical events and concepts that might not be familiar to people who don’t have a background in Edo-period culture.

As for the art, Yoshinaga has a real talent for facial expressions and for detail. Her backgrounds and costumes are lush, but her ability to depict complex emotions in just a few brushstrokes is incredible. Yoshinaga and her assistants extensively researched the history of Edo, the Shoguns, and the ôoku for the series. Most of the historical characters retain the personalities of their real-life counterparts, and the manga sticks fairly closely to historical events. Japanese history buffs will get a whole new perspective on the Ejima-Ikushima affair and the 47 Ronin. I will warn you, though, that looking up historical figures and events may lead to spoilers!

What genderswapping does, both in parodies like The Hawkeye Initiative (may be NSFW) and in more serious works like Ôoku, is to force us to look at the falseness of the socially constructed gender binary. For example, the men of the ôoku are, by and large, catty, gossipy, competitive, and obsessed with their appearance. These are not, however, feminine traits, but traits of a class of people who, having little real social or legal power at the time, had to resort to pulling strings behind the scenes to achieve any kind of influence. A man cannot hope to rule, but he may gain some influence if he fathers the Shogun’s heir or if he becomes her favored lover. If he can’t do that through good looks, pedigree, or a winning personality alone, he may find that the best way to climb the social ladder is to eliminate the competition by backstabbing and gossip.

Changing the gender of the historical characters also allows for commentary on current social issues, including using the constant problem of giving birth to an heir in order to examine Japan’s decade-long low birthrate and the subsequent social panic about working women and “herbivore men.” Yoshinaga also examines how quickly “tradition” evolves and how quickly people forget that the “traditional” is based on relatively recent social trends. By the time of the fifth Shogun, the facts that women are suited to politics and management and that men meant to be coddled for fear their weak bodies might succumb to the Pox, have permeated the culture. This how many characters believe society has been “since time immemorial.”

Unsurprisingly, Ôoku passes the Bechdel test and the Mako Mori test, but Yoshinaga doesn’t stop there. She writes deep characters–there are no token “strong female characters” or even “strong male characters,” but a diverse cast of deep, multi-faceted, flawed human beings. Even the more despicable, corrupt characters have a human side. In addition, there are a handful of queer characters and at least two genderqueer characters, one of whom is a main character in volumes 8-10.* The romances, while often heterogamous, are also queered and a very a welcome change from those in most mainstream media.

Ôoku is a feminist take on court intrigue and the “great men” of history. At the end of each story arc, I always feel sad to say goodbye to the characters, and yet I find myself growing to love the new ones. If you have a taste for Rule 63, alternate history, political intrigue, and gorgeous art, Ôoku is the manga for you.

*I use the term queer here as an umbrella term rather than LGBTQQIA; also, many of the characters in Ôoku who are not straight are not specific about their identities.

About the Author: Guest contributor Leah writes The Lobster Dance, a blog about gender and Japan, and I’ll Make It Myself!, a blog about food, geekery, and gender. She has an MA in Japanese Studies from the University of Michigan. Her favorite Shogun is Yoshimune; she ships Iemitsu/Arikoto like there’s no tomorrow; and she adores Hiraga Gennai’s facial expressions and Aonuma’s love of soap. For more in-depth analyses of the manga, films and drama, check out the Ôoku category on The Lobster Dance.